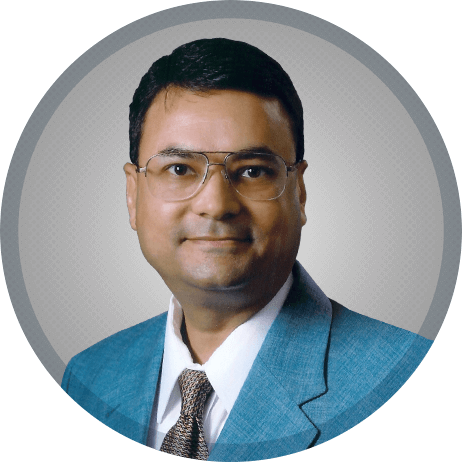 Rest assured you are in capable hands when you are a patient of Dr. Arvind Krishna.

He has been treating patients with diabetes, thyroid disease, and other endocrine problems in Canton, Ohio, and the surrounding areas since 1995.

Dr. Krishna understands how the health care provider you choose to treat your endocrine disorder can make all the difference in your quality of life. That’s why he takes pride in treating his patients as partners: he takes the time to listen, educate, and develop personalized treatment plans to manage their condition as effectively as possible. It’s no wonder patients are so pleased with his expert medical care.

Arvind Y. Krishna, MD earned his medical degree in New Delhi, India, in 1984 at one of the top medical colleges and also completed an internship and residency in internal medicine there. In the United States, Dr. Krishna completed an additional internship and residency in internal medicine at Lincoln Hospital, in affiliation with New York Medical College in New York City.

Following his residency, Dr. Krishna was chosen for fellowship training in endocrinology, diabetes, and metabolism at the prestigious Emory University School of Medicine in Atlanta, Georgia. During his fellowship, he trained at the tertiary care Emory University Hospital, Grady Memorial Hospital, Atlanta’s VA Medical Center, and the endocrine and diabetes clinics of Egleston Children’s Hospital.

Dr. Krishna is board certified in endocrinology, diabetes, and metabolism by the American Board of Internal Medicine.

Respected in the Community

After completing his fellowship, Dr. Krishna moved to Canton, Ohio, to join the staff of Diabetes and Endocrinology Associates of Stark County, Inc. in 1995. Since then, he has become well-known and highly respected within the Canton medical community.

Not only is he an exceptional doctor, but also an outstanding teacher. Dr. Krishna has served on the medical faculty at Northeast Ohio Medical University (NEOMED) since 1996, and he has received several awards for excellence in teaching medical students and resident physicians from the Canton Medical Education Foundation.

Dr. Krishna has been an active member of various hospital committees at Aultman Hospital and Mercy Medical Center in Canton, Ohio, over the last two decades.

As an expert in diabetes, metabolism, and endocrinology, Dr. Krishna has given many lectures and presentations to both his peers and the public in various cities throughout Ohio.

He has been a featured guest speaker on the Health Matters radio program on 1480 WHBC in Canton and has been interviewed for articles published in Canton and Alliance newspapers.

He has published numerous articles and studies in national and international peer-reviewed medical journals, as well as given presentations at state and national endocrine meetings.

In 2017, Dr. Krishna was elected to the board of directors of the Ohio River Region (ORR) chapter of the American Association of Clinical Endocrinologists (AACE), which represented Ohio, Pennsylvania, Kentucky, and Indiana. In 2021 he was one of the founding members of the Ohio River Region Society of Endocrinology (ORRSE) as a member of its board of directors.

In 2018, he also served as an elected member to the board of directors of the American Association of Clinical Endocrinologists' Political Action Committee (PAC).  As part of the AACEPAC delegation in 2018 Dr. Krishna successfully lobbied at the senate and congressional level for Medicare coverage for technology to help the quality of life and glycemic control in patients with diabetes.

To better serve his patients, Dr. Krishna has pursued advanced training and certifications within his field, including:

To schedule an appointment with Dr. Krishna, call Diabetes and Endocrinology Associates of Stark County, Inc. at (330) 493-0013 or use our convenient appointment request form.